The World of Yesterday: Memories of a European (German title Die Welt von Gestern: Erinnerungen eines Europäers) is the memoirof Austrian writer Stefan Zweig.[4] It is considered the most famous book on the Habsburg Empire.[5] He started writing it in 1934 when, anticipating Anschluss and Nazi persecution, he uprooted himself from Austria to England and later to Brazil. He posted the manuscript, typed by his second wife Lotte Altmann, to the publisher the day before they both committed suicide in February 1942. The book was first published in Stockholm (1942), as Die Welt von Gestern.[6] It was first published in English in April 1943 by Viking Press.[4]

The book describes life in Vienna at the start of the 20th century with detailed anecdotes.[4] It depicts the dying days of Austria-Hungary under Emperor Franz Joseph I of Austria, including the system of education and the sexual ethics prevalent at the time, the same that provided the backdrop to the emergence of psychoanalysis.

According to Zweig, earlier European societies, where religion (i.e. Christianity) had a central role, condemned sexual impulses as work of the devil. The late 19th century had abandoned the devil as an explanation of sexuality; hence it lacked a language able to describe and condemn sexual impulses. Sexuality was left unmentioned and unmentionable, though it continued to exist in a parallel world that could not be described, mostly prostitution. The fashion at the time contributed to this peculiar oppression by denying the female body and constraining it within corsets.[dubious – discuss] 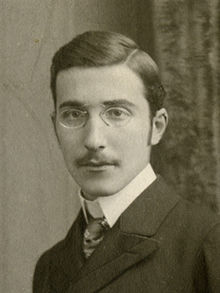 The World of Yesterday details Zweig’s career before, during and after World War I. Of particular interest are Zweig’s description of various intellectual personalities, including Theodor Herzl, the founder of modern political Zionism, Rainer Maria Rilke, the Belgian poet Emile Verhaeren, the composer Ferruccio Busoni, the philosopher and antifascist Benedetto Croce, Maxim Gorky, Hugo von Hofmannsthal, the German industrialist and politician Walther Rathenau and the pacifist and friend Romain Rolland. Zweig also met Karl Haushofer during a trip to India. The two became friends. Haushofer was the founder of geopolitics and became later an influence on Adolf Hitler. Always aloof from politics, Zweig did not notice the dark potential of Haushofer’s thought; he was surprised when later told of links between Hitler and Haushofer.

Zweig particularly admired the poetry of Hugo von Hofmannsthal and expressed this admiration and Hofmannsthal’s influence on his generation in the chapter devoted to his school years: