Dr.T.Bhaskaran was a studious researcher and writer who left us leaving behind a good number of learned research works and valuable books to read upon, think upon and act upon. He was a simple and faithful human being who inspired us by his humble way of life 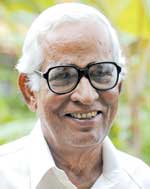 Dr. T. BHASKARAN, (20 Aug 1929 – 12 Aug 2010) was born in an agricultural family in Irinjalakkuda, Thrissur district, Kerala, India. His father Theyyan was an agriculturalist and Mother Ittaya was a homemaker.

He had his early schooling in National school and Sanskrit school at Irinjalakkuda. Joined Maharaja’s college Ernakulam for intermediate and then for post graduation. He was the first rank holder for both Sanskrit and Malayalam M.A degree examinations in Language and Literature of University of Kerala. He was awarded the degree of Ph.D, for his thesis “Malayalam Poetics with special reference to Krishnagadha” in 1972 by University of Kerala.

He was a well known Sanskrit scholar and had in-depth knowledge in Malayalam literature. His early interest was in poetics but was later on attracted to Sree Narayana Guru. Until the last breath, he was a student of contributions of Sree Narayana Guru and was an authority in this domain.