Udupi Rajagopalacharya Ananthamurthy (21 December 1932 – 22 August 2014) was a contemporary writer and critic in theKannada language born in Thirtahalli Taluk and is considered as one of the pioneers of the Navya movement.[1] He is the sixth writer to be honored with the Jnanpith Award for the Kannada language, the highest literary honour conferred in India.[2][3] In 1998, he received the Padma Bhushan award from the Government of India.[4] He was the vice-chancellor of Mahatma Gandhi University inKerala during the late 1980s. He was one of the finalists of Man Booker International Prize for the year 2013.[5] He remained a fervent critic of Hinduism and nationalistic political parties until his death from renal failure and cardiac arrest on 22 August 2014 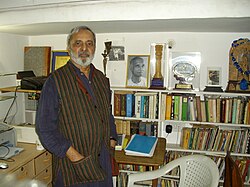 U R Ananthamurthy in his reading room

Ananthamurthy’s works have been translated into several Indian and European languages and have been awarded with important literary prizes.[1] His main works include Samskara, Bhava, Bharathi Pura, and Avasthe. He has written numerous short stories as well. Several of his novels and short fictions have been made into movies.

Most of Ananthamurthy’s literary works deal with psychological aspects of people in different situations, times and circumstances. His writings supposedly analyse aspects ranging from challenges and changes faced by Brahmin families of Karnataka to bureaucratsdealing with politics influencing their work.

Most of his novels are on reaction of individuals to situations that are unusual and artificial. Results of influences of sociopolitical and economic changes on traditional Hindu societies of India and clashes due to such influences – between a father and a son, husband and wife, father and daughter and finally, the fine love that flows beneath all such clashes are portrayed by Ananthamurthy in his works. This is evident in his stories like Sooryana Kudure (The Grasshopper), Mowni (Silent Man), Karthika’ etc. It does not mean that Ananthamurthy is just clinging to portraying only such somewhat standard subjects of Indian literature of his period. His novelette“Bara” (Drought) portrays the dynamics of a drought-stricken district of Karnataka and the challenges and dilemmas a bureaucrat may face in such situations.

The central figure of the novel Sooryana Kudure – Venkata is shunned by his son and wife for his easy-going attitude that does not take him anywhere. Venkata is a non-achiever who could not achieve any material or monetary success in his life. However, he is a simpleton who does not take life’s suffering to his heart too much. He likes to see life as living in the love of Amma (or mother-goddess). In all sufferings of life, he has the child-like curiosity about the smallest things in life – like a grasshopper (Sooryana Kudure). The evening after his son revolts and leaves the house, he would be engrossed in a sight in his yard – a grasshopper shining in the sun’s light.

His several novels were made into films like Samskara, Bara, Avaste, Mouni, Diksha.